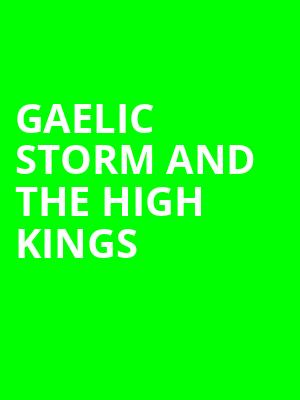 Gaelic Storm and The High Kings

Why See Gaelic Storm and The High Kings?

Two of the best Celtic folk bands around, Gaelic Storm and The High Kings, are teaming up for a tour of North America this spring! Get ready to jig, polka and reel to these two fine purveyors of traditional and innovative Celtic rock and folk. For over 25 years Gaelic Storm have brought their unfailing energy and humor to audiences all over the world, whilst The High Kings' discography since their formation in 2008 includes two platinum albums and three top-10s in the US world music charts, cementing them as the reel deal (get it) in folk music.

Recognize those shanties and drinking songs? You might have caught Gaelic Storm in the 1997 blockbuster Titanic, where they were the band on Leo and Kate's below deck adventure! The High Kings are also no stranger to famous company, having performed for Barack Obama at the St. Patrick's Day celebrations at the White House. Now you can join in the fun when they  tour together again this year, bringing joy to old and new fans alike.

Seen Gaelic Storm and The High Kings? Loved it? Hated it?

Sound good to you? Share this page on social media and let your friends know about Gaelic Storm and The High Kings at Tarrytown Music Hall.