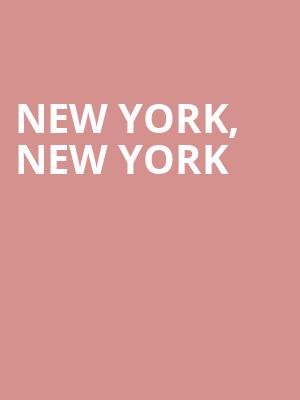 Photo by Luca Bravo on Unsplash

Top of the heap

Start spreading the news! New York, New York, a brand new musical featuring the songs of Kandor and Ebb, with additional lyrics from the one and only Lin-Manuel Miranda is heading to Broadway!

Based on the 1977 Martin Scorsese movie, New York, New York has a book from David Thompson and Sharon Washington, is directed and choreographed by Susan Stroman, and will feature some of the legendary songwriting duo's most beloved tunes. With the addition of Miranda's magic, this classic meets contemporary new production is sure to be one of 2023's most in-demand shows - you'll definitely want to be a part of it.

Following a group of artists attempting to make it in the city that never sleeps, discover the dazzle and the joy of New York, New York this spring!

Sound good to you? Share this page on social media and let your friends know about New York, New York at St James Theater.