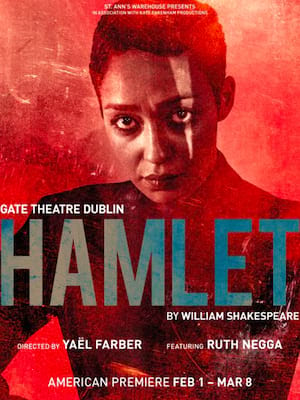 Negga also has the priceless ability to savour the language. Her voice soars on "this majestical roof fretted with golden fire" yet there is self-castigation at her capacity to unpack her heart with words.

To Be Or Not To Be? That Is The Question

Following a critically acclaimed off the West End, a bold new adaptation of the Bard's classic tragedy treads the boards of St. Anne's Warehouse in New York City this wall. Helmed by award-winning South African director and playwright Yael Farber, the production turns gender on its head and casts Ethiopian-Irish actress Ruth Negga as the titular melancholic prince, shifting the play's original focus from his identity struggles and existential anguish to the power of resistance against those who would use power for their own gains.

Returning home from school to mourn the death of his father the King, Prince Hamlet finds a viper's nest where once his happy home stood. Disgusted by the early marriage of his newly widowed mother to his Uncle Claudius, who now has the throne, he contemplates life, death and the madness in between as he ghost of his father bids him to take revenge on his murderer, the current King Claudius.

Best Hamlet I have seen. Cuts to the script erre6 appropriate and the... more

Sound good to you? Share this page on social media and let your friends know about Hamlet at St Anns Warehouse.