Sorry! You missed Kreeps With Kids at St. George Theatre

You can catch Kreeps With Kids at Borgata Music Box in Atlantic City, showing Oct 30, 2020

Kreeps With Kids is also touring to:

You are viewing a past performance of Kreeps With Kids

You can catch Kreeps With Kids at the Gramercy Theatre, showing December 5, 2020 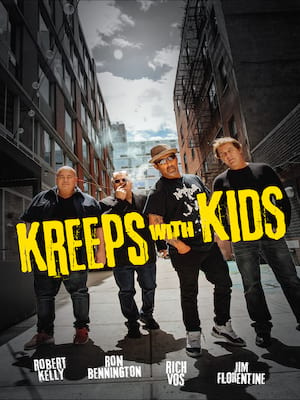 This is a comedy show about the OTHER side of parenting featuring Robert Kelly, Ron Bennington, Jim Florentine and Rick Vos.

Why See Kreeps With Kids?

Laugh at the Hilarity of Being a Parent

Kreeps With Kids brings together comedians Robert Kelly, Ron Bennington, Jim Florentine and Rick Vos as they hit the road on a nationwide tour that focuses on the humorous side of being a parent. After taking the stage together in Glenside, Pennsylvania in 2018, the foursome decided they have quite a knack for performing together and decided to take their act on tour.

Robert Kelly has been performing stand up since 1991 and is known for hilariously depicting his daily family life. Today he hosts the podcast 'You Know What Dude.' Comedy veteran Ron Bennington is the co-host of talk show 'Bennington' and host of radio show 'Unmasked.' Rick Vos has been a stand up comic ever since 1984 and has released five comedy albums and Jim Florentine is well known for his time co-hosting talk show 'That Metal Show' and hosts his current podcast 'Everybody Is Awful (Except You).'

Seen Kreeps With Kids? Loved it? Hated it?

Sound good to you? Share this page on social media and let your friends know about Kreeps With Kids at St. George Theatre.