Sorry! You missed Foy Vance at Skirball Center for the Performing Arts 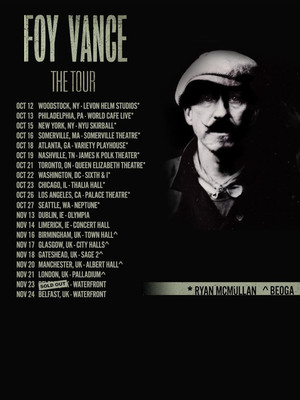 He took the crowd on a wonderful, rambling musical journey, jam-packed with songs and stories, and it was perfectly brought together by his outstanding voice and gift for a turn of phrase.

After over a year and a half out of the spotlight, Northern Irish singer-songwriter Foy Vance emphatically returns in 2019 with not one, but TWO new records and a run of shows across the USA and Canada this October. Both released on Ed Sheeran's Gingerbread Man Records, "To Memphis" is a collection of Americana inspired works releasing in September, providing a follow-up to June's soul-tinged "From Muscle Shoals". The American leg of his world tour kicks off October 12th in Woodstock NY and finishes just over 2 weeks later in Seattle WA.

Vance's career has seen him tour with the likes of Elton John and Ed Sheeran, perform onstage with The Who's Pete Townshend and have his music featured on Grey's Anatomy among many other accolades. His two new albums play heavily on his influences, choosing to get right into the minds of his American musical heroes by recording at the legendary Muscle Shoals studio in Alabama and Sam Phillips Studio in Memphis.

Sound good to you? Share this page on social media and let your friends know about Foy Vance at Skirball Center for the Performing Arts.