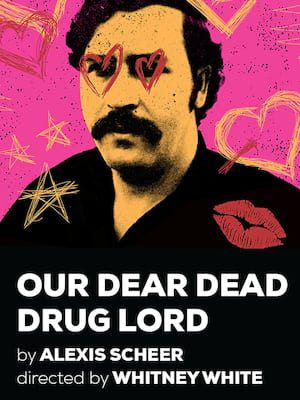 To say that Alexis Scheer's voice is one of the most excited new voices writing for the American Theatre would be a gross understatement. Our Dear Dead Drug Lord is a testament to this excitement. Scheer has taken risks in writing such a provocative play

Why See Our Dear Dead Druglord?

The World Premiere Of An Insightful New Comedy

The remarkable story follows a group of teenage girlfriends, who do many normal teenage things - falling in love, experimentation with drugs... And perhaps a few not so normal things, like practicing witchcraft and attempting to commune with the spirit of infamous drug lord Pablo Escobar. Lead by a butch queer Latina, the Dead Leaders Club grapples with the aftermath of the 2008 presidential election as they discover who they are. This girl gang has teeth!

Seen Our Dear Dead Druglord? Loved it? Hated it?

Sound good to you? Share this page on social media and let your friends know about Our Dear Dead Druglord at Second Stage Theatre Uptown - McGinn/Cazale Theatre.