Sorry! You missed The Empire Strips Back at Playstation Theater 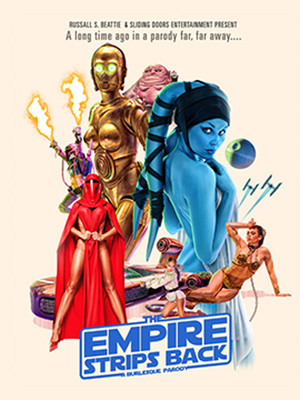 The Empire Strips Back

The best episode of Star Wars I've ever seen

Why See The Empire Strips Back?

A long time ago (2011) in a galaxy far far away (Australia), a group of burlesque performers, led by Russall S Beattie, created this deliciously adult parody of one of the world's most beloved movie franchises. What began as a three-night run soon evolved into the fully fledged extravaganza The Empire Strips Back. Described as cosplay meets comedy, the show playfully delves into the Star Wars universe, from Storm Trooper chorus lines to dominatrix Darth Vader to a lifesize Jabba the Hutt and much more, this is the perfect show for any fans of burlesque looking to relive their favorite space opera, in a totally new way. So grab your lightsaber and prepare to be amazed and amused by the best night out this side of Mos Eisley's famous cantina!

Following their US debut in 2018, the crew now land for an extended tour, bringing their unforgettable characterizations (sexy Boba Fett, anybody?) and fantastically vibrant burlesque spectacular to wretched hive of scum and villainy near you this spring.

Seen The Empire Strips Back? Loved it? Hated it?

Sound good to you? Share this page on social media and let your friends know about The Empire Strips Back at Playstation Theater.