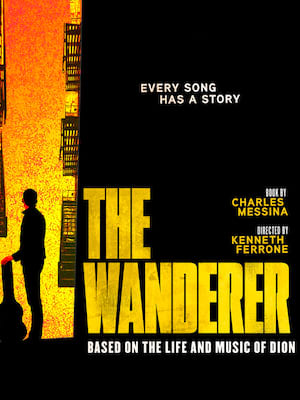 This Event Has Been Postponed Until Further Notice

If you told me as a young man that one day my journey from The Bronx to the Rock n' Roll Hall of Fame would become a musical, I would not have believed you. It's only 12 miles from Belmont Avenue to Broadway. It shouldn't have taken this long!

Why See The Wanderer?

THIS EVENT HAS BEEN POSTPONED UNTIL FURTHER NOTICE

The Life & Times Of Dion DiMucci

Following a reading at New World Stages in 2017 and at the Leonard Nimoy Theater in 2018, the hotly anticipated biographical musical about living Doo-Wop legend Dion DiMucci is set for its inaugural run at New Jersey's Papermill Playhouse. Written by New York playwright and screenwriter Charles Messina, whose works include the Off-Broadway Queen bio-musical Mercury: The Afterlife and Times of a Rock God, is destined for a Broadway stint joining an ever-growing roster of jukebox musicals on the Great White Way.

Charting Dion's stratospheric rise from the streets of the bronx to the Rock and Roll Hall of Fame and beyond, The Wanderer is packed to the rafters with the crooner's greatest hits, taken from throughout his illustrious career, from his early beginnings with the vocal group The Belmonts in the late 50s to solo stardom in the 60s and his Praise and Worship period up until the 80s.

What Is The Wanderer About?

Dubbed by Bruce Springsteen as 'the link between Frank Sinatra and Rock 'n Roll', Dion redefined the word cool for a whole generation. Of Italian-American descent, his father was a famous vaudeville entertainer and instilled in him a great love for music from a young age. Singing a capella with his friends on street corners, it wasn't long before the talented muso lead his vocal group to stardom with hits like 'I Wonder Why' and 'No One Knows'. Quickly become a teen heartthrob sensation, but along with the fame came tribulations in the form of drugs and excess. Not shying away from his troubled times, The Wanderer presents a passionate and nuanced portrait of one of old school pop music's greatest performers.

Seen The Wanderer? Loved it? Hated it?

Sound good to you? Share this page on social media and let your friends know about The Wanderer at Paper Mill Playhouse.