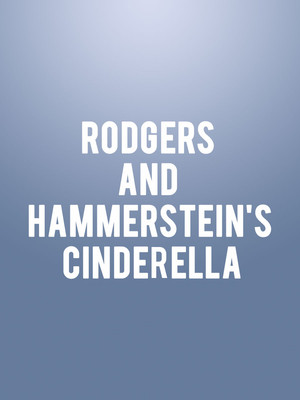 ... this Cinderella is no passive damsel waiting for a rescuing knight. She takes charge of her destiny, so much so that she doesn't lose that glass slipper; she hands it to the prince. It's a conscious choice, see; she controls her narrative.

Why See Rodgers and Hammerstein's Cinderella?

Dedicated to bringing expertly crafted new musicals as well as world class theatrical revivals back into the spotlight, New Jersey's Papermill Playhouse offers up a treasure trove of beloved, tried-and-tested musicals during its latest 2019/20 season. One such classic production is their very own adaptation of Rodgers and Hammerstein's sweeping fairytale fantasy Cinderella, which first cast its spell on Broadway in 2013 after numerous iterations on both stage and screen.

The dynamic composing duo at the heart of the classic were first approached to write a musical directly for TV, a novel idea that became a popular format of the 1950s. What really sold them on the project was the star power of Julie Andrews, who was then starring in My Fair Lady on the Great White Way. Its leading lady in place, the pair went on to pen some of their most memorable show tunes including 'Impossible/It's Possible', 'Ten Minutes Ago' and 'In My Own Little Corner' as well as infuse the widely known story with new characters and their own surprising twists.

What Is Cinderella About?

An amalgamation of Rodgers and Hammerstein's 1957 story and Charles Perrault timeless French version 'Cendrillon, ou la Petite Pantoufle de Verre', this striking Cinderella's book is given a fresh spin by American playwright and screenwriter Douglas Carter Beane. The titular heroine is still forced into a life of servitude by her villainous step-mother and vapid step-sisters but this Cinders has gumption in spades and two special friends to confide in - the revolutionary Jean-Michel and the forrest-dwelling Crazy Marie.

When Marie reveals herself to be her fairy godmother, Cinderella makes her way to the ball. Thrown in an attempt to find a bride for the kingdom's young and handsome Prince Topher, the ball isn't exactly Topher's cup of tea, but when he meets Cinderella he's fascinated by her sense of fairness when she opens his eyes to the injustices that lie just beyond the castle walls. The clock strikes midnight and a happy ending waits expectantly in the wings!

Richard Ropiak: “This is no Rogers and Hammerstein Cinderalla”

I was disappointed with the production. I expected the play to appeal... more

I saw the original version of what was a live television show with Julie... more

Sound good to you? Share this page on social media and let your friends know about Rodgers and Hammerstein's Cinderella at Paper Mill Playhouse.