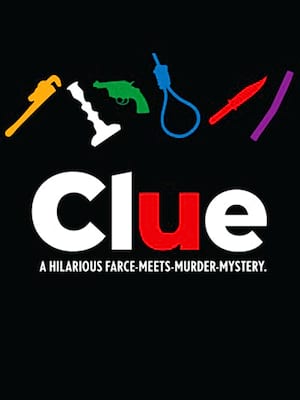 Was it Colonel Mustard in the dining room with the candlestick, or Mrs White in the library with the revolver? You'll find out in Clue, a hilarious murder mystery comedy based on the classic board game, and the 1985 cult movie version starring Tim Curry. Adapted for the stage by Jonathan Lynn, it's a hugely inventive new spin on the property, leading its cast of colorful characters from room to room in a whirlwind of slapstick comedy and theatrical verve.

What is Clue About?

The year is 1954, and on a rainy, windswept night, six strangers gather at a remote manor at the invitation of its owner, Mr. Boddy. The reason they've been assembled isn't clear, but when Mr. Boddy turns up dead, they must band together to solve the crime. As the butler leads them around the manor in the hunt for clues, the guests soon discover that each of them have a motive for committing the murder. But who was it, and how many of them will meet the same fate as Mr. Boddy before the killer is unmasked?

Image is property of Paramount Pictures

Based on the screenplay by Jonathan Lynn
Written by Sandy Rustin
Directed by Casey Hushion
Additional material by Hunter Foster and Eric Price
Based on the Paramount Pictures Motion Picture
Based on the Hasbro Board Game, Clue
Original music by Michael Holland

Seen Clue? Loved it? Hated it?

Sound good to you? Share this page on social media and let your friends know about Clue at Paper Mill Playhouse.