Sorry! You missed Chasing Rainbows: The Road To Oz at Paper Mill Playhouse 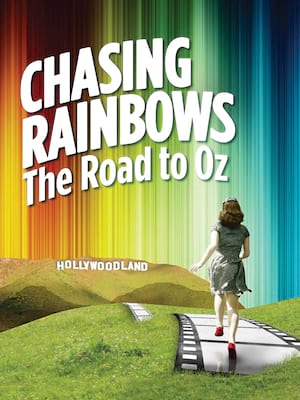 Chasing Rainbows: The Road To Oz

The songs are wonderfully presented and the dance sequences are mesmerizing.

Why See Chasing Rainbows: The Road To Oz?

A Tribute To The One & Only Judy Garland

With a glowing endorsement from Liza Minelli (her very own daughter) a brand new musical about the life and times of the vaudeville-starlet turned entertainment industry icon Judy Garland has its sights set on the bright lights of the Great White Way, first making a hotly anticipated debut at well known pre-Broadway tryout venue the Paper Mill Playhouse.

Written by Marc Acito, the writer of the 2015 George Takei and Lea Salonga-lead Broadway production of Allegiance, with musical adaptation by David Libby, Chasing Rainbows, The Road to Oz chronicles the Hollywood transformation of small town Minnesota girl Frances Gumm into a tour de force performer whose illustrious career spanned 45 years and multiple accolades, including an Oscar, a Golden Globe, a Tony and a Grammy.

What Is Chasing Rainbows About?

First appearing in vaudeville alongside her sisters as a child, Judy Garland changed her name when she signed to Metro-Goldwyn-Mayer studios in early teendom. A rising, money-making attraction for the company, Judy was surrounded by the likes of Ava Gardner and Elizabeth Taylor and constantly reminded she did not fit in with the glamourous ideals of Hollywood siren beauty, she was typecast as the girl next door until her star-making turn in Wizard Of Oz. Although paving the way for profound success, her dealings in Hollywood lead to drug and money troubles, which would ultimately end in her untimely death. Through legendary songs like 'Over The Rainbow', 'Everybody Sing' and 'You Made Me Love You', Chasing Rainbows tells her remarkable true tale with nuance and tenderness.

I thoroughly enjoyed this production at the PaperMill Playhouse. The standout... more

Sound good to you? Share this page on social media and let your friends know about Chasing Rainbows: The Road To Oz at Paper Mill Playhouse.