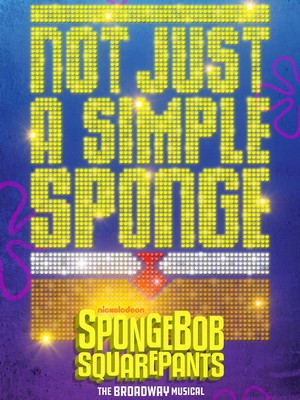 'SpongeBob' is simply a pleasure

Following its well-received run in Chicago, the inhabitants of Bikini Bottom are live on Broadway! Co-conceived and directed by Steppenwolf Theatre's Tina Landau, an impressively starry roll call of musical artists have contributed to the score, including the late David Bowie, and The Flaming Lips and Cyndi Lauper! Join Spongebob, Patrick the Starfish and Squidward on a brand-new adventure for the stage, this psychedelic musical can not be missed!

Perfect for both adults and kids to enjoy, but be prepared to submerge yourself into the hallucinogenic world that is Bikini Bottom. Winner of a 2018 Tony Award for Scenic Design, this is Spongebob as you've never seen him before!

The story follows Spongebob on a quest to save Bikini Bottom from complete and utter destruction from mysterious forces from the world above. When chaos erupts, their lives hang in the very balance - all until an unlikely hero rises to the challenge to save the day - with a little help of his friends.

First premiering on Nickelodeon in 2009, the adventures of Spongebob is something of a global cultural icon for cartoon lovers of all ages. A combination of slapstick silliness and surreal flights of fancy made it a big hit in countless countries where it was syndicated Now celebrating its ninth season, Spongebob and co have also made the leap to the silver screen in two movies that featured appearances from David Hasselhoff and Antonio Banderas.

We recommend that children be at least five years old to attend a performance of SpongeBob SquarePants. Children under the age of four are not permitted in the theatre.

2 hours 20 minutes, including one intermission.

Best Scenic Design of a Musical

Go and see this show for an explosion of FUN!

How do you keep a generation captivated by their screens entertained and focused for two hours? You make sure the production is too good to look away! From the moment I walked into the Palace Theatre my inner child launched from within and was set free.

Sound good to you? Share this page on social media and let your friends know about Spongebob Squarepants at Palace Theater.