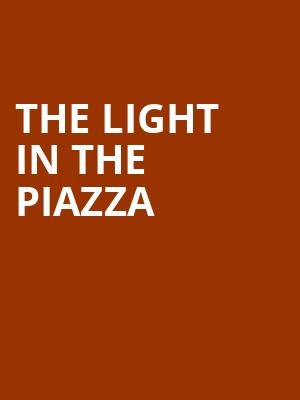 Photo by Luiz Neto on Unsplash

The Light In The Piazza

Why See The Light In The Piazza?

A luminous tale of a mother and daughter's trip to 1950s Italy, Craig Lucas and Adam Guettel's The Light In The Piazza returns to New York in this special presentation from Encores! directed by Chay Yew and starring Ruthie Ann Miles. Debuting on Broadway in 2005 The Light In Piazza received much critical acclaim for its immensely romantic score. The production went on to win six Tony awards including the award for Best Original Score.

Set in Florence in the summer of 1953, American Margaret Johnson and her daughter Clara take in the sights and sounds of their surroundings. When a gust of wind carries Clara's hat across the square and into the hands of Fabrizio Naccarelli a romance between the pair ensues. But as Clara's and Fabrizio's love deepens, secrets begin to surface as it becomes clear that there is more to Clara than meets the eye.

You might be forgiven for thinking that Craig Lucas and Adam Guttel's The Light In The Piazza has shades of the legendary Rodgers and Hammerstein, and you'd be right - Guttel is Richard Rodger's grandson.

Seen The Light In The Piazza? Loved it? Hated it?

Sound good to you? Share this page on social media and let your friends know about The Light In The Piazza at New York City Center Mainstage.