Sorry! You missed Bat Out of Hell at New York City Center Mainstage 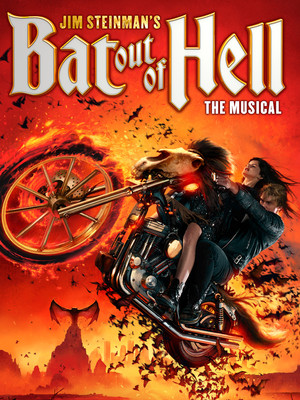 Bat Out of Hell

Even if you leave New York City Center after this piece of theatrical madness like a bat out of hell gulping at the night air, you may do so with a smile on your face-a baffled, stunned one, but still a smile.

Why See Bat Out of Hell?

The Meatloaf Musical Thunders Into NYC

Fresh from its critically acclaimed West End Run in London, Bat Out Of Hell is set to take a bite out of the Big Apple during a hotly anticipated, strictly limited six week run at the New York City Center in the Summer of 2019! The no-holds-barred, action-packed rock 'n roll musical has received much praise for its effervescent energy, unbridled sense of joy, and of course it foot-stomping, Meat Loaf centric score - the stuff of musical theatre legend!

Based on the breakout 1977 smash hit Meat Loaf record, which sold over 43 million albums, the new production comes from the pen of Bat Out Of Hell's original composer and collaborator Jim Steinman. At first an attempt to write a futuristic rock opera influenced by the story of Peter Pan, the songs found their home in the voice of Michael Lee Aday, whose career as Meat Loaf blossomed as a result. With their delightful sense of campy theatricality, intricate narratives and anthemic choruses, they fit right in to the jukebox musical canon and make for a rollercoaster ride of rafter-clearing vocals, artfully choreographed head-banging and copious amounts of leather.

What Is Bat Out Of Hell About?

Classics like 'You Took The Words Right Out Of My Mouth', 'Paradise By The Dashboard Light' and of course, the titular track weave together the tale of the rock 'n roll romance between Peter Pan-esque Strat, a rebellious young poet and Raven, the pampered daughter of despotic tycoon Falco. Falco rules over Obsidian, a dystopian city that falls somewhere between Mad Max and West Side Story, where the youth are forever frozen in time thanks to chemical warfare and must contend with hormones, hairspray and overthrowing the corrupted powers at be with a glam metal twist. Things reach a pyrotechnic head when Raven runs away to join the rebellious youngsters and angers her father in the process.

Two hours with one intermission

Please note, the above images are from the Bat Out Of Hell London engagement.

Gail Bennett: “A MUST SEE MUSICAL!!!”

Saw Toronto production twice and it was spectacular! Rock and Roll music... more

It’s The most amazing musical I’ve ever seen. Can’t wait to see... more

Sound good to you? Share this page on social media and let your friends know about Bat Out of Hell at New York City Center Mainstage.