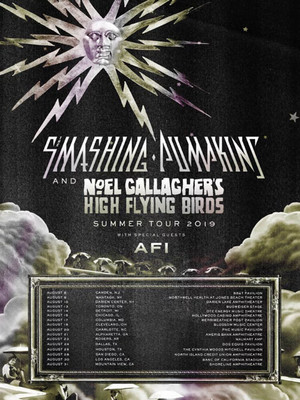 The Smashing Pumpkins are hitting the road with the legendary Oasis guitarist Noel Gallagher, and his solo band, the High Flying Birds. The boys will be kicking things off this summer in New Jersey, before trekking across North America and rounding things off later that month in California. And it's not just these two iconic bands you'll get to see, AFI will also be opening this already wild event! So make sure you don't miss, what might be, a once in a lifetime experience of seeing a night of 90s nostalgia.

About The Smashing Pumpkins

Of all the major alternative rock bands of the early '90s, the Smashing Pumpkins were the group least influenced by traditional underground rock. Lead guitarist/songwriter Billy Corgan fashioned an amalgam of progressive rock, heavy metal, goth rock, psychedelia, and dream pop, creating a layered, powerful sound driven by swirling, distorted guitars. Corgan was wise enough to exploit his angst-ridden lyrics, yet he never shied away from rock star posturing, even if he did cloak it in allegedly ironic gestures. In fact, the Smashing Pumpkins became the model for alternative rock success - Nirvana was too destructive and Pearl Jam shunned success.

Noel Gallagher's High Flying Birds formed in 2010, and consists of many familiar faces from the well known Oasis band including, former Oasis guitarist Gem Archer, Oasis pianist Mike Rowe, Oasis drummer Chris Sharrock, and the Zutons bassist Russel Pritchard. Despite their former band Oasis ascending to a level of success not seen in the UK since The Beatles, Oasis' foundations were built on shaky ground - namely the combustible relationship between Noel and his younger brother Liam. After years of acrimony the band finally called it quits in 2009, and the brothers went their separate ways.

Sound good to you? Share this page on social media and let your friends know about Smashing Pumpkins with Noel Gallagher at Northwell Health.