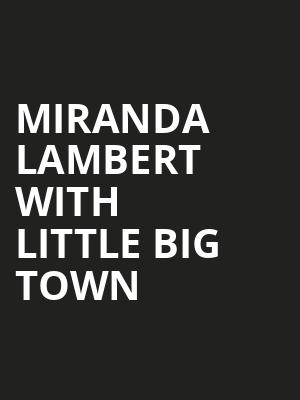 Jump on the Bandwagon with Miranda Lambert and Little Big Town

Miranda Lambert and Little Big Town, two names you'll definitely have heard of, are joining forces for a mammoth North American tour. The titled Bandwagon is returning to the roads for 2022, where they'll be joined by the Cadillac Three for all 15 stops. The Country music royalty are set to create some magic for their fan bases, building upon the success of their duet 'Smoke and Mirrors' which was released on Lambert's 2014 LP 'Platinum'.

Lambert and LBT have been bringing their melachonic ballads and authentic Country sound to fans across the States since the late 90s, with a combined album count of 15 these kings and queens of royalty definitely won't run out of country tunes to keep fans boogying all night long. With their relatable lyrics and easy listening melodies both acts have transcended the boundaries of North America and have won the hearts of fans across the globe.

Combining their mighty forces is sure to make a night to remember for any Country music lover, so grab your boots and kick it down with Miranda Lambert and Little Big Town when they hit your town!

Miranda, as always delivered her sweet, sassy and sultry vocals. She is... more

Both acts were outstanding! Sang all the songs I wanted to hear! Miranda... more

Sound good to you? Share this page on social media and let your friends know about Miranda Lambert with Little Big Town at Northwell Health.