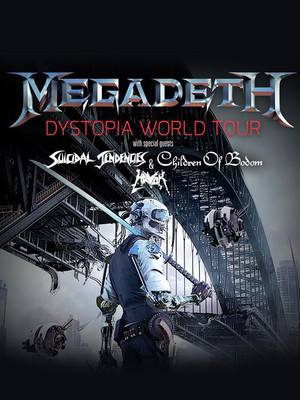 Out on the road

With 15 studio albums in their back pocket, LA-based thrash metalheads Megadeth are heading out on yet another tour! This latest trek will see the four-piece hit several US cities before heading out to their fans across the globe. Expect to hear hit tracks like "Trust", "Almost Honest" and "Breadline" when Megadeth arrives in your city!

Formed in 1983 after Dave Mustaine was dismissed from Metallica, Megadeth forms part of the big four of thrash metal, which also includes Anthrax, Metallica and of course, Slayer. Never far from controversy for their aggressive and dark lyrics that have seen them banned from the likes of MTV, this has done nothing to kerb their phenomenal pulling power, having garnered platinum status for five of their 14 albums, with 50 million sales worldwide and a Grammy award!

Seen Megadeth? Loved it? Hated it?

Sound good to you? Share this page on social media and let your friends know about Megadeth at Northwell Health.