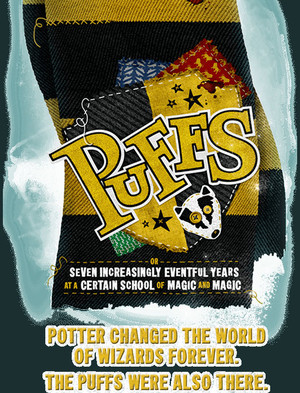 Maybe you didn't grow up with them like Harry, but the Puffs are so lovable and relatable, you'll leave the theater wishing they were in the stories all along.

All hail the Hufflepuffs!

Making a transfer to the New World Stages this July, following its popular engagement at New York's Peoples Improv Theater, Puffs brings a slice of the Harry Potter magic to the Big Apple. Celebrating the least-featured Hogwarts House and its little known characters (yes, we know Cedric Diggory, but look how that turned out for him), this tongue-in-cheek comedy play by Matt Cox will also be including family-friendly performances, so young witches and wizards can join in on the fun!

Proving to be such a hit with audiences, Puffs is now set to become available in Cinemas nationwide! For two nights only (May 9 and 12) Puffs will be Live Broadcasted from their home at the off-Broadway theater, Stage 5!

So when Harry, Hermione and Ron were having dangerous adventures battling evil wherever they found it, and Slytherins Malfoy, Parkinson, Crabbe and Goyle were plotting and throwing shade, and the Ravenclaws were just being clever clogs, what were the Hufflepuffs up to? This delightful "The Zeppo"-esque play takes a much-wanted look at the seeming "duffers" of Hogwarts, forever overshadowed by the Gryffindor/Slytherin grudge match.

Focusing on one young wizard, recently arrived from New Mexico, we follow him through seven fretful years at an unnamed school as he battles a bespectacled bully (ahem), and learns magic in a school that despite all its protections, simply is a dangerous place for children! The underdog gets his due in this witty play that celebrates the forgotten heroes of Hogwarts.

May be inappropriate for 13 and under. (Some strong language.)

One hour and 45 minutes, with no intermission

Seen Puffs? Loved it? Hated it?

Sound good to you? Share this page on social media and let your friends know about Puffs at Stage 5 New World Stages.