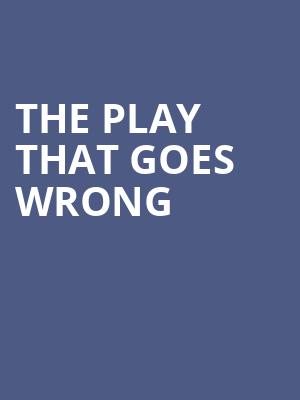 The Play That Goes Wrong

The Funniest Play Broadway Has Ever Seen!

Why See The Play That Goes Wrong?

The Play That Just Won't Leave

Although export comedy smash hit The Play That Goes Wrong made its final Broadway bow at the Lyceum theater in January 2019, theatregoers and critics adore Mischief Theatre's first production so much that it simply moved to a long term home Off Broadway at the New World Stages! From humble off-West End beginnings at London's Old Red Lion fringe theater/pub in 2013 (rumour has it a mere four audience members attended its debut), the riotously funny rib-tickler of a show has grown to become a global phenomenon, merging slapstick physical comedy with a wry sense of tongue-firmly-in-cheek British wit and a winning self awareness.

Four years later, with an Olivier Award already under its belt, TPTGW won a Tony during its Mark Bell-directed and J.J. Abrams-produced stint on Broadway and was so well received it extended its run by five months. A cross between Sherlock Holmes and Monty Python, the show expertly weaves together mishaps, accidents and pratfalls with timing so expert it's not uncommon for the audience to gasp at the ensuing onstage chaos. It's a play-within-a-play that takes farce to the next level and though it may seem that everything is going wrong, its underlying intelligence, technical mastery and jaw dropping stagecraft get things very, very right.

What Is The Play That Goes Wrong About?

Proving that it takes a high level of skill to maintain a constant incompetence, the Cornley Polytechnic Drama Society is looking to add another blockbuster show to their already esteemed roster. Their past productions include 'The Lion and The Wardrobe', 'Cat' and 'James and the Peach' (unfortunately budget concerns mean they've had to produce economic versions of these classics), but things are looking up for the amateur company. They've recently come into some money and are gearing up to put on 'The Murder At Haversham Manor', a thrilling whodunnit that could be the next Mousetrap, that is unless the bumbling crew can remember their lines, keep the set from falling apart, and find the cast's runaway canine member as well as a myriad misplaced props!

Two hours with an intermission

Please note: the above image is from a past production of The Play That Goes Wrong.

Brilliantly BAD! And if London Bridge ever does fall down, the Mischief Theatre Company would be my first suspect!

The name of the producing theatre company says it all, Mischief Theatre. With nothing short of a miracle, The Murder at Haversham Manor has returned to New York City though thankfully it is merely a guise for the brilliant The Play That Goes Wrong!

Seen The Play That Goes Wrong? Loved it? Hated it?

Sound good to you? Share this page on social media and let your friends know about The Play That Goes Wrong at Stage 4 New World Stages.