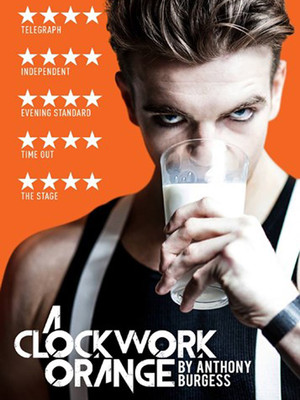 "Stylish, stylised, and drenched in sweat, the show has a breathless, exhilarating energy!"

Why See A Clockwork Orange?

A blistering adaptation of Anthony Burgess' classic, A Clockwork Orange arrives Off-Broadway after an acclaimed run at London's Park Theatre. Directed by Alexandra Spencer-Jones, this all-male staging injects a homoerotic edge into Burgess' dystopic, ultra-violent world, and wraps the action around bludgeoning fight choreography and an eclectic soundtrack, featuring everything from Placebo to (of course) Beethoven.

Jonno Davies (Shakespeare in Love) makes his New York stage debut in the lead role of Alex DeLarge, reprising his performances from the London run.

What is A Clockwork Orange About?

Set in a nightmarish, totalitarian future Britain, the story centers on Alex DeLarge, a psychotic teen who has a taste for ultra-violence. He's the leader of a gang who roam the streets, robbing, fighting and raping as they please, their acts fuelled by the narcotic milk drink Moloko Plus. After one of their brutal escapades goes awry, Alex finds himself in prison, where he becomes the subject of an experimental new psychological treatment, which seeks to eradicate his thirst for violence.

May be inappropriate for 14 and under

Images are taken from the London Park Theatre production

Seen A Clockwork Orange? Loved it? Hated it?

Sound good to you? Share this page on social media and let your friends know about A Clockwork Orange at Stage 4 New World Stages.