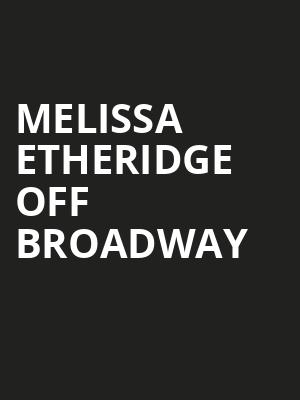 I cannot wait to feel the exchange of energy and deep connection that's provided by an intimate theater experience.

Why See Melissa Etheridge Off Broadway?

As one of the most prolific singer-songwriters of her generation, Melissa Etheridge has enjoyed a groundbreaking career in the spotlight since the release of her self-titled debut in 1988. With a legacy of great songwriting and legendary LGBTQ+ activism, fans will be thrilled at this intimate chance to see Etheridge live in her newest venture at the New World Stages this fall.

Titled Melissa Etheridge Off-Broadway: My Window - A Journey Through Life, expect a one-of-a-kind evening where next to some of her greatest hits, Etheridge will detail her adventure from Kansas to award-winning performer.

Melissa Etheridge has been an iconic voice in alternative rock and roll. When in 1993, her second record 'Yes I am' went double platinum, that success was cemented. As a performer she has won two Grammy Awards and an Academy Award for best original song, but also as a social and gay rights activist, she has left a lasting impression on American popular culture.

Etheridge has 14 studio albums under her belt and each one features the timeless sense of yearning for the human connection that the songstress is so adept at articulating in her driving anthems and softer, acoustic ballads. She's a powerhouse performer when it comes to her live shows, pouring every ounce of emotion and heart that she's got into every performance - her vocal voracity often draws comparisons to the late, great Janis Joplin.

Seen Melissa Etheridge Off Broadway? Loved it? Hated it?

Sound good to you? Share this page on social media and let your friends know about Melissa Etheridge Off Broadway at Stage 1 New World Stages.