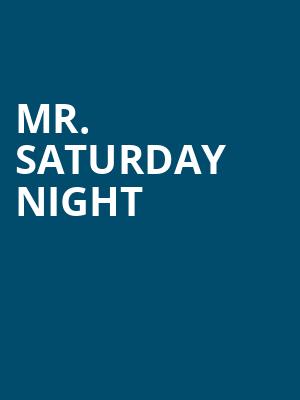 For the first time since 2013, the one and only Billy Crystal is returning to Broadway in this brand new musical! An adaptation of his 1992 movie of the same name, Mr. Saturday Night is the story of comedian Buddy Young Jr., whose star has long since wained. Known for his outrageous act, his ego pushed away all those close to him. But now he's got a chance at a comeback - can he win back his fans and fix his family? There's only one way to find out!

Written and adapted and starring Crystal, Mr. Saturday night marks a welcome Great White Way for the legendary comedian and actor, who was last seen in his Tony-award winning solo show, 700 Sundays. Lowell Ganz and Babaloo Mandel co-write the book, with Jason Robert Brown providing the score. Lyrics are by Amanda Green and direction is provided John Rando.

One of the most recognizable comedic faces in America, Billy Crystal exudes the everyman, with wry observations and silly jokes. He first came to attention in sitcom Soap and as a cast member on Saturday Night Live, before going on to star in some of the most iconic movies of the 80s ad 90s, including City Slickers, The Princess Bride, and of course, When Harry Met Sally. He's hosted the Oscars nine times to date, and is also the voice of loveably round Mike Wazowski of Monsters Inc.

Of returning to the role of Buddy, he says "Creating and portraying the 75-year-old comedian Buddy Young Jr. in the film of Mr. Saturday Night was one of the highlights of my career," before adding, "30 years ago I needed 5 hours of make-up to play him, now I just show up."

My husband and I both loved the show. Loved!! Billy was wonderful as was... more

Sound good to you? Share this page on social media and let your friends know about Mr. Saturday Night at Nederlander Theater.