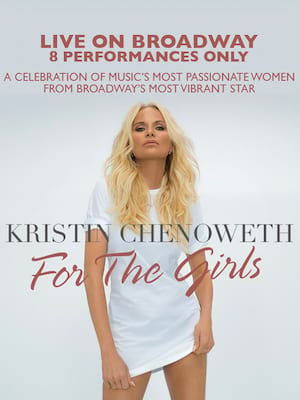 Chenoweth's singing facility is polished. Her artistry allows her to convey masterfully the emotive meaning of songs.

Tour de force performer Kristin Chenoweth has long reigned over the Great White Way as one of the theatre scene's most prolific leading ladies. Part of the very fabric of contemporary Broadway, Chenoweth made her debut in the 1997 production of Kander and Ebb's Steel Pier and a mere two years later starred in her breakthrough role, originating Glinda the Good Witch in Stephen Schwartz's landmark musical smash hit Wicked. In the two decades since, the celebrated entertainment icon turned her talents towards film, TV and voiceover work, earning a Tony, a Grammy, an Emmy and a star on the Hollywood Walk of Fame for her considerable efforts.

Don't miss out when the celebrated diva returns to Broadway for a limited eight-performance engagement at the historic Nederlander Theatre this fall. Timed to support the late September release of her seventh solo studio album For The Girls, the concert series sees the songstress take to the stage to pay homage to the passionate women who have influenced her career and music.

Singing her own renditions of classic songbook tunes The Way We Were, When I Fall In Love and The Man That Got Away, as well as original material arranged by Drama Desk Award-winning orchestrater Mary-Mitchell Campbell, Chenoweth and her undeniable charm, astonishing vocals, jaw-dropping technique and inspiring versatility make for a powerhouse show you simply won't want to miss.

Sound good to you? Share this page on social media and let your friends know about Kristin Chenoweth at Nederlander Theater.