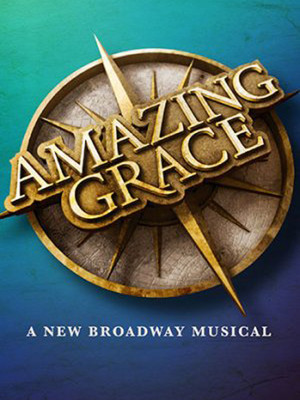 "The cast is superb...this is one of the best-looking musicals to reach New York in recent seasons."

A lush adventure set on the high-seas

Following its well-received premiere in Chicago last year, Amazing Grace transfers to Broadway. A historical epic that tells the story of the famous hymn's less famous composer, the Englishman John Newton, the show is a boldly designed, rip-roaring adventure, which nevertheless explores its real-life inspiration with seriousness and sensitivity. The Chicago try-out, which took place at the Bank of America Theatre, was hailed for its ambition in tackling such weighty subjects, while still infusing its tale with lively production and smart, melodious numbers.

Most of the talented ensemble transfer to New York. Leading the cast in the role of Newton is Tony nominee Josh Young, who received his award nod back in 2012 on his Broadway debut in Jesus Christ Superstar. Also returning are Tony winner Chuck Cooper (The Life), Chris Hoch (Matilda), Erin Mackey (Chaplin) and Stanley Bahorek. The music and lyrics are by Christopher Smith and the book by Smith and Arthur Giron, while choreography comes courtesy of Tony Award winner Christopher Gattelli (Newsies). The director is Gabriel Barre (The Wild Party).

WHAT IS AMAZING GRACE ABOUT?

Amazing Grace tells the story of John Newton, the former slave trader who, following his conversion to Christianity, became an abolitionist, Anglican cleric and hymn writer. The musical focuses on Newton's conversion and subsequent dedication to ending slavery, a journey of self discovery which would inspire him to pen one of the greatest songs of that age, or any other.

We begin in the 1740s, with the impetuous John arriving home from university, with no higher purpose on his mind than to drink and be merry. His slave trading father is not too sympathetic to this ambition and summarily forces his son into the navy. It's when his ship is attacked by the French, and John is saved by his slave Thomas, that his extraordinary journey truly begins.

Suitable for ages 10 and above

Two hours and 55 minutes with one intermission

Images are taken from the Chicago production

Amazing Grace is an original musical based on the real life story of John Newton, the man behind the song that has been sung for centuries. Britain rules the world and it is an exciting time of travel, trade and triumph over lands far and wide.

Steen: “Broadway at its finest”

Sound good to you? Share this page on social media and let your friends know about Amazing Grace at Nederlander Theater.