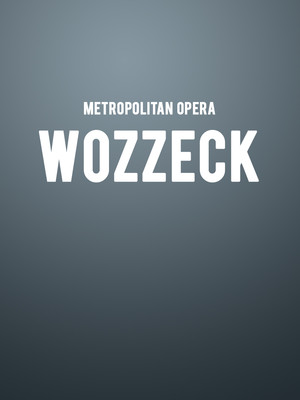 Poverty, pain, and passion lead the poor Wozzeck down a perilous path of destruction in Alban Berg's uncompromising opera. Often regarded as a masterpiece of the 20th Century, Wozzeck shows us the sharp, transformative power of exploitation and brutality, told with virtuosity by a monumentally emotional score.

William Kentridge returns to the Met Opera following his debut work Lulu in 2015. Updating the tale of the doomed soldier to a visceral pre-WWI apocalyptic landscape.

Constantly taunted by his peers and superiors, poverty-stricken soldier Wozzeck is unable even to find solace in his home life, with partner Maire looking for consolation elsewhere and their son an outcast for being illegitimate. Rage and anxiety burn through him - possibly at the fault of an experimental doctor - but the psychosis grows into violent insanity in this sad tome of hardship and revenge, proving that some things are not always worth forgiveness.

Sung in German with Met titles in English, German and Spanish

One hour and 32 minutes with one intermission