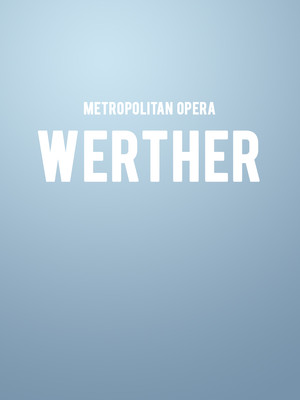 Based on Goethe's heartbreaking novel.

The irresistible tale of unrequited love unfolds tragically in Jules Massenet's lushly scored opera, based on Goethe's semi-autobiographical novel 'The Sorrows of Young Wether'. Sorrows they truly are as the brooding poet falls for the betrothed Charlotte and is driven to the brink of life itself when he realizes his chance at winning her is ultimately doomed. Piotr Beczala stars as the titular Werther, alongside Joyce DiDonato as Charlotte in this unmissable production from Sir Richard Eyre.

With her fiance Albert away on a trip, Charlotte, the eldest daughter of the local Bailiff finds herself being escorted to the ball by Wether, a young man known for his gloomy outlook. But by the end of the ball, Werther is irrevocably in love, daring to hope Charlotte could return his affections.

When Albert returns he and Charlotte marry as planned, as per her promise to her later mother. Werther's world is torn apart by the nuptials and utterly disconsolate. Is there a chink in Charlotte's armor? Does she really love Albert and will she make up her mind before it is too late? This heartbreaking story is sure to leave you with chills as the BLO recounts this tribute to forbidden love.

Sung in French with Met titles in English, German, Spanish and Italian

Two hours and 45 minutes with one intermission