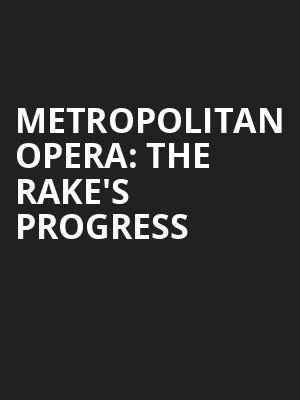 For idle hearts and hands and minds the Devil finds work to do.

The circumstances of young Tom Rakewell are the focus of this moral opera from Stravinsky, based upon the infamous prints of William Hogarth depicting the pitfalls of 17th Century London, and the downfall of those who tread the dissolute path. The Metropolitan Opera stage Jonathan Miller's surrealistic production in summer 2022, following the titular rake from newly engaged country buck with a desire for the finer things in life, to a beleaguered casualty of his feckless decadence. With a libretto by W.H Auden and Chester Kallman, The Rake's Progress is opera's ultimate cautionary tale. Conducted by Susanna Malkki, Golda Schultz is Anna Truelove alongside Ben Bliss as the doomed Tom.

Concerned that her fiance Tom Rakewell has no gainful employment, Anna Truelove urges him to find his purpose. But Tom is young and lazy, and when alone, wishes for a life of fun and frolics. Upon this utterance the devious Nick Shadow appears, telling him he is an envoy sent by a long-lost uncle who has left Tom a substantial inheritance. Beside himself with glee, Tom makes for London, leaving Anne behind and employing Shadow as his servant, who is only happy to lead him astray. With every wish granted, Tom strays further into the path of iniquity until a thrilling finale that sees Nick reveal his true form and Tom's very soul tested to the limit.

Sung in English with Met Titles in English, German and Spanish

Stephanie Blythe as Baba the Turk