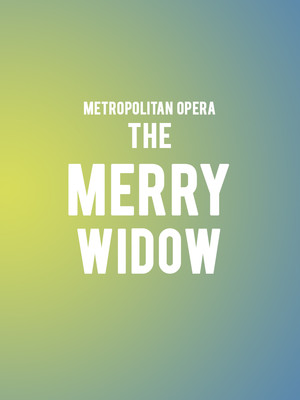 Susan Graham returns to the Met with the title role in Francis Lehar's classic operetta. Directed by Tony Award-winning Susan Stroman (The Producers), this celebrated production is a lavish take on Lehar's comic story of love blossoming amidst bureaucratic wrangling. Graham is Hanna Glawari, a newly wealthy widow in the impoverished country of Pontevedro, whose fortune could be the only thing that saves her native land from being plunged into bankruptcy. Andriana Churchman performs as Valencienne, starring alongside Paul Groves who plays the role of Danilo.

WHAT IS THE STORY BEHIND THE MERRY WIDOW?

Set amid the lamplit glamour of fin de siecle Paris, this popular opera tells the comedic and bittersweet love story between the engimatic widow, Hanna Glawari and the dashing Danilo, who was forced to spurn her love years before due to her low birth. The race is on to find Hanna a husband of Pontevedro origin (a principality of Spain), otherwise the loss of her wealth will mean disaster for the economy. The action is filled with elegant ladies, eligible bachelors and Maxime's famous can-can dancers. Will Danilo ever admit his love for Hanna, or will she remain convinced that her many suitors are looking to her fortune, rather than to her as a person? The Merry Widow has become one of the 20th century's most beloved works, and has crossed over into ballet as well.

Two hours and 45 minutes including an intermission

Seen Metropolitan Opera: The Merry Widow? Loved it? Hated it?