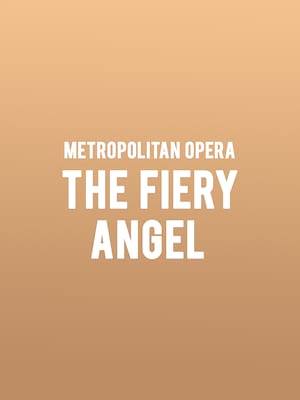 It has moments of crashing dissonance, pounding rhythms and - especially at the climax of the opera - multi-part choral writing that can seem chaotic and shrill. But it's all masterly and brilliantly imagined.

What is The Fiery Angel About?

Based on the 1908 novel by Valery Bryusov, The Fiery Angel is an intriguing tale of love, the supernatural and all too human flaws. It chronicles the trials and tribulations of Renata, a young woman searching for a lost love. By chance, she meets knight errant Ruprecht, who falls deeply in love with her. But Renata seeks an angel in human form, whom she believes to be her twin flame, and as she proceeds on her quest the lines between the spirit realm and the earthly plane become increasingly blurry.

Sung in Russian with titles in English, German and Spanish

2 hours 9 minutes with no intermission

Seen Metropolitan Opera - The Fiery Angel? Loved it? Hated it?