Sorry, it looks like Metropolitan Opera - Romeo et Juliette is no longer happening on these dates 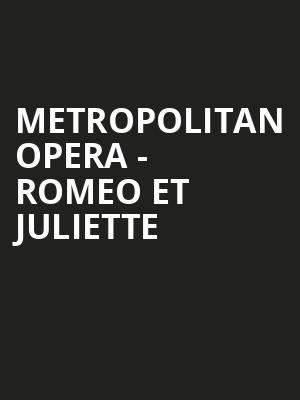 'For this alliance may so happy prove, To turn your households' rancour to true love'

two houses, both alike in dignity...

Two warring families in old Verona are ordered on pain of death by the Prince to put aside their differences and end the skirmishes for the sake of their city. However, the families, the Capulets and Montagues have other ideas. When the only son of Lord and Lady Montague, Romeo, spots the daughter of the Capulets, Juliet at a party they are instantly besotted with each other and vow not to let their families get in the way of true love.

However, simmering tensions between the families explodes after the two elope, and a double murder sees Romeo exiled outside the city, and Juliet betrothed to another. Can the two lovers find a way back to each other, or are they doomed to live out the curse of their families' actions?

Sung in French, with titles in German, English and Spainish