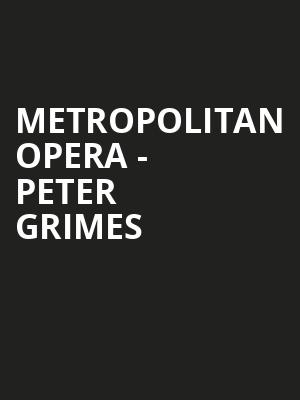 Including the 'Sea Interludes'

Benjamin Britten's powerful score permeates this tale of a fisherman hell-bent on securing a career-making catch, at the expense of any who gets in his way, especially his young apprentices. Directed by John Doyle, Allan Clayton follows up his thrilling turn as Hamlet as the titular Peter Grimes, alongside soprano Nicole Car as Ellen, the woman he loves.

Premiering in 1945 and one of Britten's most popular works, this sea-faring opera examines a close sea-side community, and the mistrust that breeds as Peter Grimes continues his singular vision.

C. 1830, the community of a small seaside town in England is aghast at the actions of fisherman Peter Grimes, who, following the death of one apprentice, is ordered by the local magistrate not to take on another. Ignoring the decision, Grimes finds a new young man to join him in his search for 'one good catch', after which he plans to buy a home and marry local girl Ellen Orford. But when new apprentice John shows signs of abuse exacted by Grimes, retribution from the villagers, tired of his bullying, is not far behind.