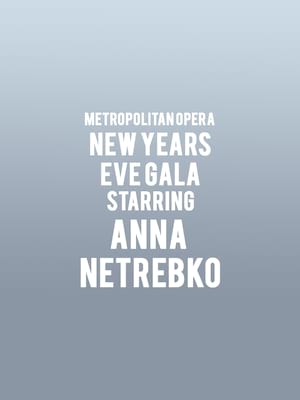 The intimate and the operatic display of vocal prowess are almost different art forms and few singers have truly excelled in both.

What better way to ring in the New Year than in the opulent surroundings of the Metropolitan Opera House? If that weren't glamorous enough, the Met proudly presents an unprecedented program featuring the one and only Russian opera superstar Anna Netrebko. As 2019 melts into memory, the celebrated diva will perform the best of Puccini, singing the roles of Mimi, Tosca and Turandot in one special evening.

A lyric and coloratura soprano of great renown, Anna Netrebko's career beginnings read like an opera. Working as a janitor at Saint Petersburg's Mariinksy Theatre, she was discovered by iconic conductor Valery Gergiev, who became her vocal mentor. After her acclaimed 1995 debut as Susanna in the Marriage of Figaro, her penchant for compelling characterisations, dark, soaring voice and charismatic stage presence ensured starring roles in operas across the globe.