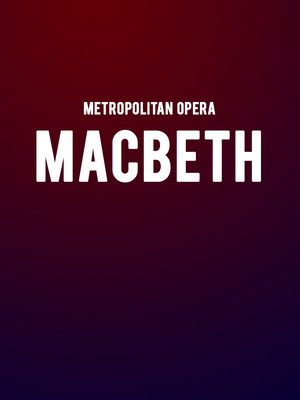 Witness one of the greatest tragedies, the story of Macbeth.

The barren moors of Scotland and the perilous games played by bloodthirsty nobles combine to create one of Verdi's most thrilling and evocative works, returning to the Met as part of the 2019/20 season. Last seen in 2014, this searing production from Adrian Noble will raise heart rates even higher as superstar Anna Netrebko takes to the stage as Shakespeare's most infamous heroine.

A trio of witches gift (or curse) the brave Scottish general Macbeth with a prophecy: one day he will rule all of Scotland. Consumed by the idea of being the King of Scotland and spurred on by his wife, Macbeth murders King Duncan and takes the crown for himself.

The guilt that follows begins to eat away at Macbeth and drives him to commit more murders, and soon becomes the ruler he feared to be. The bloodbath followed by a civil war leads Macbeth and Lady Macbeth into madness and ultimately their deaths.

Three hours and four minutes with one intermission

Photo by Cassi Josh on Unsplash

The production went well at the beginning, had some semblance of the Shakespeare... more