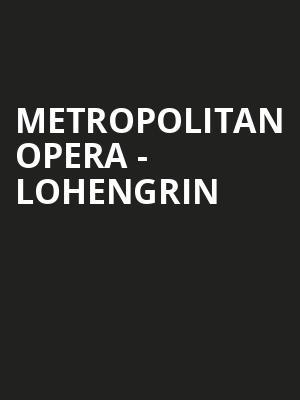 After an absence from the Metropolitan Opera House stage of nearly twenty years, Wagner's medieval romance returns in a new tour de force staging from Francios Girard, starring Piotr Becazala and Christine Goerke. A highly influential piece which includes the now ubiquitous 'Bridal Chorus' Lohengrin was created between the composer's Tannhauser and the Ring Cycle, marking his maturity and the future direction that his operatic works would take.

Also known as the Swan Knight, Lohengrin is a character first seen in Wagner's own Parsifal, in turn, based on an epic medieval poem by Wolfram Von Eschenbach. Appearing in a realm divided by politics and the fight for religious domination, Lohengrin promises to unite the people, strengthen the country and save the life of a desperate noblewoman wrongly accused of the murder of her brother, one condition - they may never know the mysterious knight's identity. But will they resist the lure of the forbidden or will they lose their benefactor and devolve into crisis once more?

Sung in German, with Met titles in English, German and Spanish