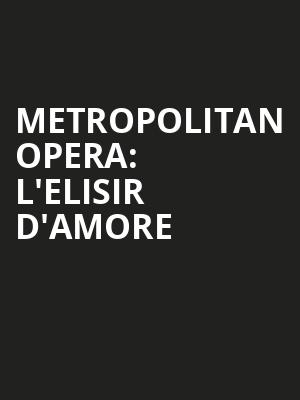 Over all, this psychologically charged take on Elisir is fascinating.

With all the right ingredients for an effervescent romantic comedy, Gaetano Donizetti and Felice Ramani's Elixir of Love adds a sparkle to The Met's 2022/22 season in this glorious production by Broadway's Barlett Sher. Starring Golda Schultz and Aleksandra Kurzak in rotation as Adina, alongside Javier Camarena and Xabier Anduaga, who makes his Met debut, as Nemorino.

When the shy Nemorino approaches the beautiful Adina, he proclaims his love to her - only to find her indifferent to him. Noticing that she is reading Tristan and Isolde, he is immediately inspired; would a love potion give him his heart's desire? Conveniently, a traveling salesman happens to be passing through the village, and Nemorino buys a bottle of the "potion" from him, not realizing it is a fake.

The two dance around each other; Nemorino with the newfound confidence that he believes his elixir has given him - it's just a bottle of Bordeaux! - and acts indifferently to Adina, who immediately agrees to marry a soldier in the local militia out of revenge for this snub. It's only when the nuptials are called that Nemorino panics; he buys yet another bottle, using money earned through enlisting with the army as a last resort. Comically, this brings all the local girls to him, but not Adina. Will these two be able to stop playing mind games long enough to realise their love for each other?

Sung in Italian with Met Surtitles in English, German, Italian and Spanish

Two hours and 40 minutes long with one intermission