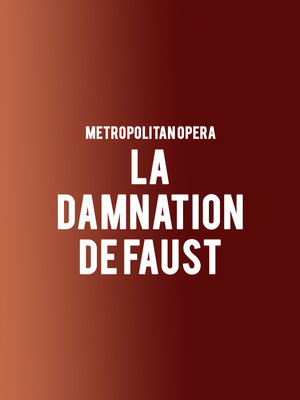 That was only the start of Berlioz' strangeness. He had visions. The pandemonium of sound in the "Damnation" must be heard to be believed.

A Legendary Deal With The Devil

The splendour and ceremony of the Met's lauded production of Berlioz's epic "legend dramatique" La Damnation de Faust is distilled in their latest staged concert version, which features special guest conductor Edward Gardner and a star studded ensemble class including American tenors Bryan Hymel and Michael Spyres (who share the role of the titular doomed scholar Faust), Latvian mezzo-soprano Elina Garanca in the role of Marguerite and Russian bass Ildar Abrazakov in the fearsome role of Mephistopheles.

Inspired by Geothe's immortal dramatic poem, the legendary comic opera straddles extremes just like the original - at once grand and intimate, exceedingly beautiful and artfully yet wildly angular, it captures a profound fable of sin and damnation with a boundary pushing, fragmented structure and imaginative instrumental effects. Rolling timpani, larges swathes of brass and honking bassoons punctuate the tale of ageing scholar Faust who makes a deal with the devil - his soul in return for eternal youth.