Sorry, it looks like Metropolitan Opera - Il Pirata is no longer happening on these dates 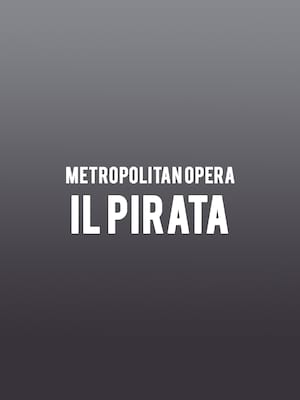 A remarkable work, it contains, almost fully formed, the essence of both Bellini's preoccupations and style.

The opera is set in the 13th century on the island of Sicily and follows the trials and tribulations of Gualtiero, forced to become a pirate after vanished from his home by Ernesto, the Duke of Caldora and a love rival. They both adore the beauteous Imogene, but she truly loves Gaultiero. When the handsome pirate returns to the island he discovers Imogene is married to Ernesto and a whirlwind of passion, revenge and death ensues.

Sung in Italian with subtitles

3 hrs and 1 minute with an intermission