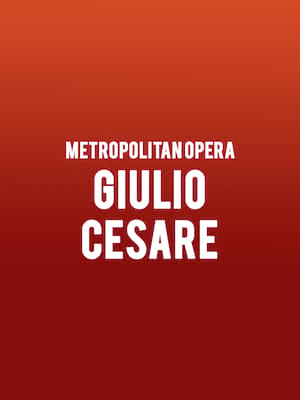 The opera that conquered London in Handel's time comes to the Met in David McVicar's inventive production! The acclaimed production previously triumphed at its Glyndebourne premiere in 2005, praised by the critics for its witty yet tragic post-colonial framing of Handel's Caesar and Cleopatra tale. McVicar's production incorporates elements of Baroque theater and 19th-century British imperialism to illuminate the opera's ideas of love, war, and empire-building.

What Is Giulio Cesare About?

The ever-popular opera chronicles the legendary meeting of historical lovers Ceasar and Cleopatra and explores the inner lives of these larger-than-life characters with a sweeping score as rich in dreamy, melodic subtlety as it is in vocal theatrics and heroics. Loosely based on the events of the Roman Civil War of 49 - 45 BC, the opera transports the action to the era of British imperialism and begins when Ceasar persues his enemy Pomepo all the way to Egypt. In the ancient kingdom he becomes embroiled with the magnetic Cleopatra's plot to depose her boy king brother Tolomeo.

4 hrs and 38 minutes with two intermissions