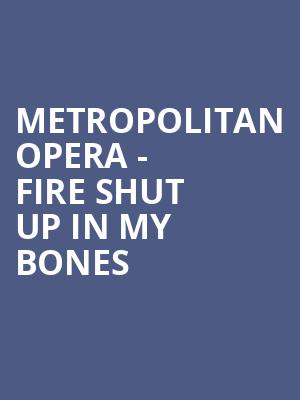 Metropolitan Opera - Fire Shut Up In My Bones

Why See Metropolitan Opera - Fire Shut Up In My Bones?

Terence Blanchard's 'Fire Shut Up In My Bones' will open the much anticipated Met Opera's 2021/22 season. Not only is this one of the first productions to resume after a year of cancellations but, more importantly, it is also the first opera by an African American composer to be performed on the Met stage. The production is a collaboration with the Opera Theater of St Louis as well as St Louis Jazz. This bold opera tackles challenging themes, and is based upon Charles M. Blow's memoir of the same name.

This Met production sees Will Liverman perform the role of Charles, the opera's protagonist. Liverman stars alongside Angel Blue as Destiny/Loneliness/Greta, and Latonia Moore as Billie. 'Fire Shut Up In My Bones' centres around Charlie as he struggles to overcome a childhood and adolescence of hardship and abuse. Some key female figures - some real and others spiritual - help Charles to forge a new path for his life. Set against the backdrop of Southern America, 'Fire Shut Up In My Bones' saw critical acclaim by key critics when it premiered in 2019. Terence Blanchard is an award-winning jazz musician and Oscar-nominated film composer.

Seen Metropolitan Opera - Fire Shut Up In My Bones? Loved it? Hated it?