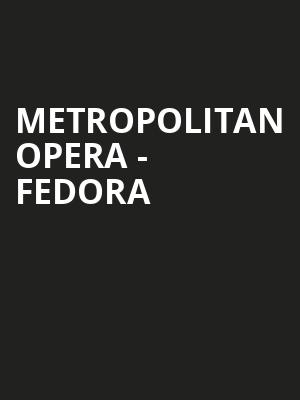 Returning to the Met for the first time in 25 years

Sir David McVicar's pulse-raising production of Umberto Giordano's high-drama opera graces the Met Opera House stage this winter, marking the work's first Metropolitan Opera outing since 1997. Based on Victorien Sardou's 1898 play of the same name (written especially for Sarah Bernhardt), Fedora is three acts of blazing arias, passionate melodies, and Victorian tragedy that follows the titular Princess Fedora as her wedding plans are interrupted by the untimely murder of her fiance.

On the eve of her wedding, Russian Princess Fedora is devastated to learn of the death of her fiance Count Andrejevich. The suspect in the frame is one Count Loris, a known Nilhilist sympathizer. A police investigation is launched, led by diplomat  De Siriex, but that does not stop Fedora, set on revenge, from following Loris to Paris for a showdown. But instead of revenge, Fedora finds something else; love has sprung from an unlikely place and it up to the princess to weigh her morals - does she deliver justice, or follow her

Sung in Italian, with Met titles in English, German, Italian and Spanish

Two hours and 25 minutes with one intermission