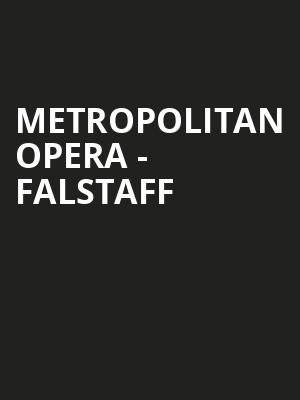 One of literature's most compelling characters

Fun and games with Falstaff

Verdi's humorous final opera gets a 20th Century update in this production from Robert Carson, retaining all the buffoonish charm of the original. Michael Volle makes his Met Verdi debut in the title role, transporting us not to the 16th Century but to the regal town of Windsor, just outside of post-Second World War London where Sir John attempts to woo his targets with predictably silly results.

What is the story of Falstaff?

Errant and perpetually drunk, the Knight Sir John Falstaff sets out to seduce two very wealthy widows and gain access to their fortunes. However when said widows get wind of this scheme, they decide to cook up their own dish of revenge. Full of laughter and light, with one of Verdi's merriest scores, don't miss this chance to see who Orson Welles called 'Shakespeare's greatest character' get up to his old tricks!

Clearly one of The Bard's favorite personalities, Falstaff appears in three of Shakespeare's plays and is mentioned in five.