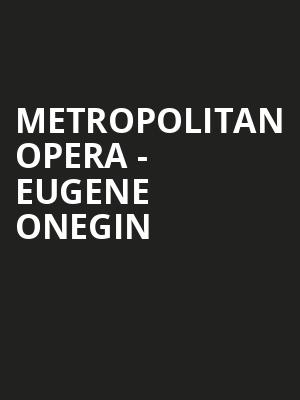 My whole life has been pledged to this meeting with you...

A work of the Great Russian Romantic-Era Composer Pytotr Ilyich Tchaikovsky, Eugene Onegin is a tale of burning passions, love unreturned and regret. Perhaps one of the best examples of the Lyric Opera style that places emphasis on melody with a fantasy or romance theme, the opera showcases Tchaikovsky's soaring melodic brilliance and virtuosic orchestration. Ailyn Perez stars as the lovestruck Tatiana, alongside the storming Igor Golovantenko as Onegin, with Piotr Beczala returning to excite fans as Lensk in Deborah Warner's lush production.

The story follows the selfish hero of the title, Eugene Onegin and his lack of reciprocity with regards to an innocent and naive young girl named Tatiana. Tatiana falls in love with him at first sight and is heartbroken when Onegin states he cannot return her feelings. Out of boredom, the impulsive and facetious youth then starts a duel with his closest friend, one that can only end in death...

Sung in Russian with titles in English, German and Spanish.

Eugene Onegin is a co-production of the Metropolitan Opera and English National Opera.