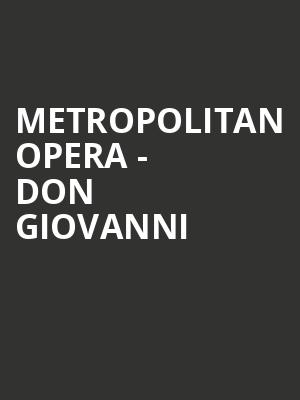 It's as much of a historical revelation as it is a musical delight.

The ever-enduring Don Giovanni returns to the Metropolitan Opera, this time with Tony-winning director Ivo van Hove at the helm. Played by Peter Mattei, Mozart's libertine philanderer is plunged into an abstract architectural landscape, where his story of unavenged justice plays out. Fresh from his hit production of West Side Story, this is bound to be one of the Met's most talked-about productions this season!

This opera is remarkably timely given its setting in feudal Europe prior to the French Revolution, where crimes committed by the rich and powerful go unpunished. Don Giovanni, a notorious lech, and rapist, attempts to carry off the virginal Donna Anna against her will and kills her elderly father in cold blood after he is caught. However, Giovanni escapes with his identity hidden by a mask, and Donna Anna is filled with a lust for vengeance against the masked attacker, and even spurns the advances of the kind Ottavio who truly cares for her.

Giovanni carries on as usual, even trying to seduce and attack a bride on her wedding night, and beating up her new husband. Things come to a head, however, when Anna recognizes the voice of her attacker as that of Giovanni, and begs Ottavio to avenge her. Proud, arrogant, and cruel to the last, Giovanni is confronted by the specter of Anna's father who asks him to repent; he refuses and is consumed by flames and sent to hell. The entire party gathers and ruminates on Giovanni's now-cursed fate.

Sung in Italian with Met Titles in English, Italian, Spanish and German

I saw the production of Don Giovanni last night with a friend and would... more