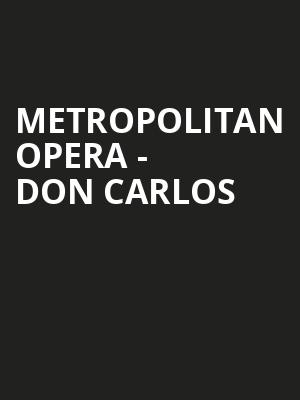 Verdi's grand five-act opera performed in all its glory!

The Metropolitan Opera present Giuseppe Verdi's epic opera in its original five-act French spoken incarnation for the first time as part of their 2021/2022 season! Verdi's grand opera about doomed love will be reborn under new staging by Sir David McVicar and will mark McVicar's 11th production with the Met Opera.

Don Carlos is a sweeping tale of love and war, set upon the backdrop of the Spanish Inquisition. It has been the subject of many opera productions throughout the centuries, with many revisions and language changes along the way. The Metropolitan Opera's 2022 production will mark the first time that the New York institution will produce Verdi's original French version in its entirety, no cuts, no revisions! Don't miss this momentous moment in the Met's history!