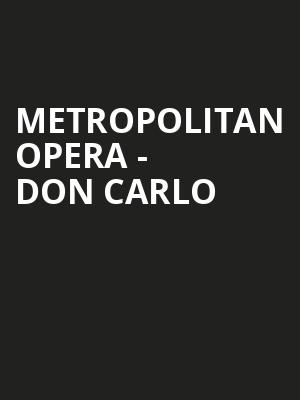 Verdi's grand five-act opera performed in all its glory!

Verdi's grand opera about doomed love returns in this spectacular new staging from the renowned director Sir David McVicar. Marking his 11th production created for the Metropolitan Opera. Now presented in Italian, Russell Thomas takes on the role of the Don Carlo, a man trapped between his private passion and his public duty.

Love is in the air when Elizabeth of Valois is betrothed to Prince Don Carlos of Spain, in order to secure a lasting peace between their two countries. Falling in love almost instantly, they spend cloudless days in happy ecstasy; however their bliss is short-lived when the treaty is amended, and she must marry Carlos' father instead. Disaster.

Instead of his wife, Elizabeth is now Carlos's stepmother and cannot shake her love for him; however, she is true to her husband and tries to put the prince off. The sinister Grand Inquisitor demands that King Philip has Carlos executed to secure the future of the country, however, the headstrong prince decides to escape. Meeting Elizabeth one last time, they have a passionate goodbye - unfortunately, it seems that the Inquisitor was waiting for them in the shadows all along.