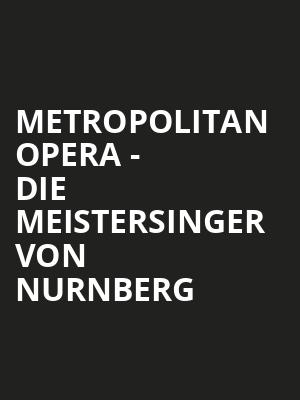 The Master-Singers of Nuremberg

For the first time in 7 years, composer and librettist Richard Wagner's superb comedy returns to the Met stage. Known for being among the longest operas performed, it's only right that the award winning conductor Sir Antonio Pappano will be taking the stand in leading the Metropolitan Opera on this journey. Following her rapturous performance in the Met Stars Live in Concert, the sensational soprano Lise Davidsen returns to lead the unsurpassed cast and stars as Eva.

What Is It About?

Set in the mid-16th century in Nuremberg, which at the time was a free imperial city, the story revolves around an association of musicians and amateur poets known as the guild of Meistersinger (Master Singers). Michael Volle stars as the historical figure Hans Sachs, who was one of the most famous of the Meistersinger guild.

This is only opera of Wagner's to be a comedy and the only one to be based on an entirely original story!