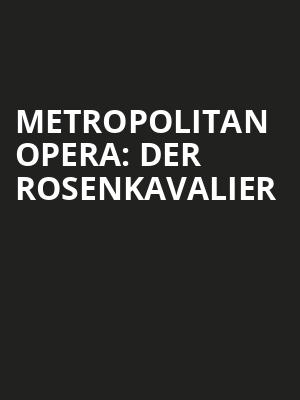 Disguises, duels and duets are the order of the day in Richard Strauss' magnificently extravagant Der Rosenkavalier, or the Rose-bearer, being the name of an engagement tradition in mid-eighteenth century Vienna. The task is simple, elect someone to deliver to your beloved a silver rose as proof of your love and reap the reward in matrimony. But woe-betide you if you chose the wrong man, especially if he is younger, more handsome, and altogether a lot more desirable than you.

Returning for 2023, don't miss this stunning production from Robert Carsen, starring Lise Davidsen is the aging Marschallin, Isabel Leonard as her lover Octavian and soprano Erin Morley as Sophie, the beautiful younger woman who steals his heart.

Concerning the older and alluring Marshallian, a grand princess who finds solace in the arms of her much younger lover Octavian until the entrance of her hot-blooded and churlish cousin Baron Ochs. Setting his sights on the wealthy and beautiful merchant's daughter Sophie, he enlists the help of Octavian as his rose bearer. Of course, once they set eyes on each other, all is lost for both Marshallian and Baron Ochs. The former accepts her fate elegantly, the latter, well, not so much...

Sung in German with titles in English, German and Spanish