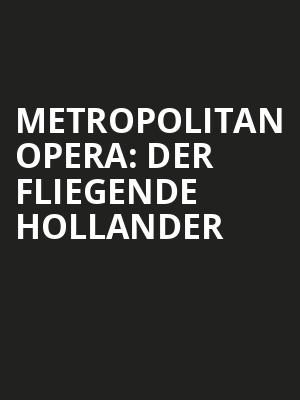 All graphics, logos and imagery are property of the production

From here begins my career as poet, and my farewell to the mere concoctor of opera-texts.

The specter of the Flying Dutchman has long been a terrifying sight for sailors. At its heart is a wretch of a captain, damned by Satan to roam the oceans forever, with the chance of salvation presented once only every seven years, when they may go ashore and attempt to find true love. Wagner's nautical adventure is a thrilling and haunting opera and marked a turning point in his career. Tomasz Konieczny lends his Wagnerian specialty to the role of the damned Dutchman, with Elza van den Heever as the woman who sets out to tame him.

Whilst heading towards home, Captain Daland finds his ship in the middle of a howling tempest. He sets a course for the nearest port and leaves his helmsman in charge whilst he rests with the other sailors. But the helmsman proves not to match his job and promptly falls asleep. As the ship runs aground, the ghostly apparition of a vessel grapples itself to the ship, and the dark, shadowy Dutchman steps aboard...

Meanwhile, Daland's daughter Senta has heard of the fate of the Dutchman and has vowed to be his salvation, much to the chagrin of her former love, Erik.

Sung in German with titles in German, English and Spanish