Sorry, it looks like Metropolitan Opera - Dead Man Walking is no longer happening on these dates 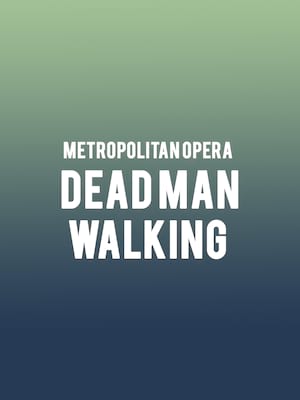 Dead Man has become, arguably, the most performed of contemporary operas, racking up two recordings and innumerable performances around the world in less than two decades.

Since its San Francisco Opera debut in 2000, Jake Heggie and Terrence McNally's simmering adaptation of Dead Man Walking has enjoyed over 300 revivals amongst the world's leading orchestras. The 21st-century masterpiece finally makes its Met Opera debut in the hands of none other than avant-garde Belgian theatre director Ivo Van Hove and the Met's very own music director Yannick Nezet-Seguin.

American mezzo-soprano extraordinaire Joyce DiDonato takes on the role of Helen Prajean, a nun of the Sisters of Saint Joseph Medaille order. When she reveals to her colleagues that she has received news from an inmate with whom she has been corresponding, they advise against further communication. The inmate is one Joseph De Rocher, a convicted murderer on death row, who seeks spiritual advice as he lives out his last days. Poignant hymnal music punctuates the pair's rare relationship as they navigate the stormy waters of anger, despair, and redemption.