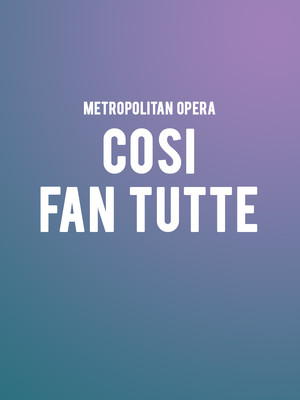 Roll up, roll up for Cosi Fan Tutte!

Return to Coney Island as the Met stages the first revival of Phelim McDermott's glorious production of the Mozart favorite. The third collaboration between Mozart and librettist Lorenzo Da Ponte (following Le Nozze di Figaro and Don Giovanni), the work didn't fare too well when it debuted in 1790, with many considering amoral and risque, but has since been thoroughly reappraised and become an unmissable part of any season!

Originally set in Naples, Phelim McDermot relocates the action to Coney Island of the 1950s, filling the stage with fire-eaters, bearded ladies and carousels.

The tale begins with a wager - the wily Don Alfonso bets two young soldiers that their fiancees will be unfaithful to them. The soldiers agree to pretend to be called away on duty and then return in disguise and try and seduce their the other's betrothed. And so begins a comedy of the sexes that would make Shakespeare proud.

Suitable for most audiences

3 hours and 30 minutes, with two intermissions

Sung in Italian with Met Titles in English, Spanish, German and Italian

Sublime singing from this top-drawer cast with Maestro Levine at the helm... more

Mozart's music is gloriously performed by the Met's lead singers and ensemble.... more